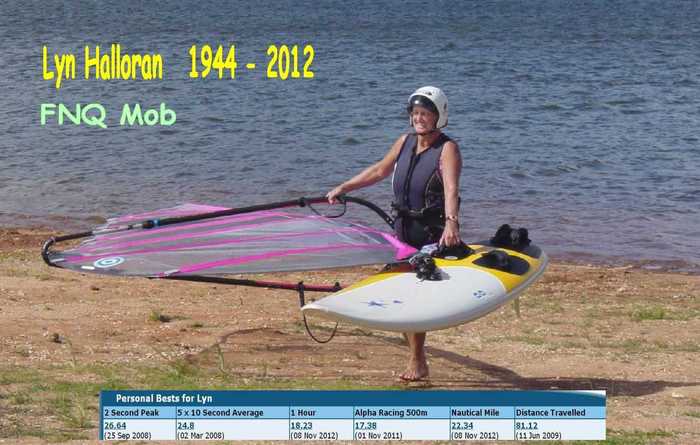 Lyn was born in Sydney in 1944.  She was 43 when she jumped onto a queue to have a windsurfing lesson on Tinaroo Dam.  I jumped on the queue right behind her.  That was in 1987 and windsurfing became our life.   Over the next 26 years we travelled extensively, always taking our gear.  She and I joined the GPSTC and FNQ Mob in 2008.   She posted a total of 9418 Klms.

It was a wonderfull life, but it came crashing down in December 2012, when, one morning I could not wake her.   Life slipped away from her on December 10th 2012.

On the anniversary of her passing I scattered her ashes to the wind and water of Lake Tinaroo, only a stones throw from where she had her first lesson....     She was there with me and preparing to step onto her board.  I felt her draw a breath of fresh clean air.   She released the sail a little to spill the first gust and then hooked into the harness and stepped into the straps.  I caught the smile on her face and heard her "Yippee" as she locked down and skimmed across the dam.   RIP Lyn.